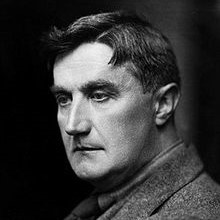 Born in 1872, English composer Ralph Vaughan Williams received a conventional upper-middleclass education in which music played an important role. Playing the violin in the Charterhouse school orchestra, he began composing at age six. He attended the Royal College of Music beginning in 1890 as a composition student and in 1892 he entered Trinity College to study history and pursue bachelors of music degree. He returned to the Royal College of Music in 1895 and, after his marriage to Adeline Fisher, he went to Berlin in 1897 to study with Bruch.

His early works include mostly chamber music and some songs. As a historian, he also wrote periodicals and articles as well as contributing to the second edition of the Grove’s Dictionary of Music and Musicians in 1904. In 1905, Vaughan Williams premiered his work that would become his principal work around the turn of the century, a choral setting of Walt Whitman titled Toward the Unknown Region. While this piece was well received, Vaughan Williams was dissatisfied with his own product and traveled to Paris to study under Ravel. He continued to compose, finding inspiration in the works of Walt Whitman and Thomas Tallis with Fantasia on a Theme by Thomas Tallis for strings in 1910 becoming one of his best-known works. Hugh the Drover, a ballad opera set in Napoleonic days, was finished in 1914 and shelved for the next four years while Vaughan Williams served in the army and spent most of his time in France.

In 1919, Vaughan Williams joined the staff at the Royal College of Music and in 1921 became the conductor of the Bach Choir. In 1935 his Fourth Symphony was introduced by Adrian Boult at a BBC concert in London and a few weeks later he was appointed to the Order of Merit.

Some of Vaughan Williams compositions include nine symphonies, film scores (the first being in 1940), six operas, incidental music (including The Wasps and The Bacchae), five ballets, twelve concerti (including one for tuba), works for concert bands (including English Folk Songs for military band) and a wealth of choral and vocal pieces and collections.

Ralph Vaughan Williams’s music expresses a deep regard for and fascination with folk tunes while simultaneously showing patriotism toward England in the subtlest form.