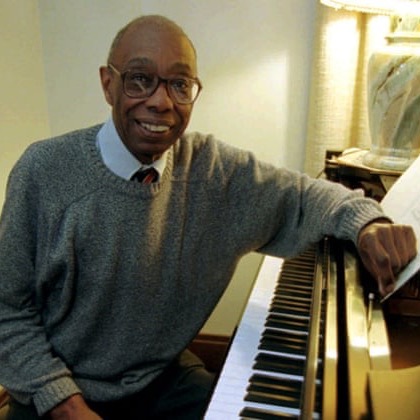 George Theophilus Walker was born in Washington, D.C. on June 27, 1922. Walker’s father was a physician who had emigrated from the West Indies. Walker’s sister, Frances Walker-Slocum, was also a distinguished educator, pianist, and organist. His wife, Helen Walker-Hill, was a pianist and musicologist specializing in music composed by African American women. Their son, Gregory T.S. Walker, is a violinist and composer, and their son Ian Walker is a playwright.

Walker began piano lessons with his mother at the age of five and continued his early musical training at Howard University, where he gave his first public performance at the age of 14. At the Curtis Institute of Music in Philadelphia he studied piano with Rudolf Serkin and composition with Samuel Barber. A year after graduation he wrote his first string quartet, the second movement of which he revised into Lyric for Strings nearly five decades later—possibly his most-performed piece, and one of the most-performed pieces by a contemporary American composer. He toured Europe as a concert pianist in 1954, and continued his studies at the Eastman School of Music the following year, becoming the first African American to receive a doctorate from that institution in 1956. In 1957 he returned to Europe and spent two years furthering his compositional studies with famed pedagogue Nadia Boulanger. He toured as a performer in Europe again in 1959.

During the 1960s, Walker shifted his focus to a long and distinguished teaching career. He held positions at such institutions as the Dalcroze School of Music, Smith College, the University of Colorado, Peabody Institute of Johns Hopkins University, and the University of Delaware. He chaired the music department at Rutgers University from 1969 until his retirement in 1992, as Professor Emeritus.

Though his musical influences as a composer came from mainstream trends of 20th-century classical music such as serialism, the works of Debussy and Stravinsky, as well as African-American spirituals, blues, and jazz, Walker has his own distinct musical voice.

He continued his work in composition throughout his life, receiving commissions from such major orchestras as the New York Philharmonic, and performances by orchestras throughout the world. His many awards included two Guggenheim Fellowships and two Rockefeller Foundation Fellowships. In a compositional career highlighted by many honors, in 1996 Walker became the first African American composer to win a Pulitzer Prize for music, for his Lilacs for voice and orchestra. Based on a text by Walt Whitman in memory of the death of Abraham Lincoln, Lilacs was commissioned by the Boston Symphony Orchestra.  His last orchestral work, the fifth of his ‘Sinfonias’, was Visions, in memory of the victims of the Emanuel African Methodist Episcopal Church shooting in 2015. Walker died in 2018 at the age of 96.