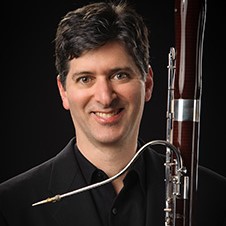 Bassoonist and composer Seth Krimsky has been with the Seattle Symphony since 1986, and was appointed principal bassoon in 1990. He received his Bachelor of Music degree from the University of Southern California in 1983, where he studied bassoon performance with Norman Herzberg. In 1984 he became the principal bassoon for the Cape Performing Arts Board Orchestra of Cape Town, South Africa, an Opera and Ballet orchestra that served the entire Cape Province. While in Cape Town, Krimsky won the National Young Artists Competition. During his time in Seattle, Krimsky has also been an active chamber music performer, sharing an especially long and happy association with the Seattle Chamber Players. He has also appeared as principal bassoon with the Mostly Mozart Orchestra of Lincoln Center and the Waterloo Festival Orchestra.