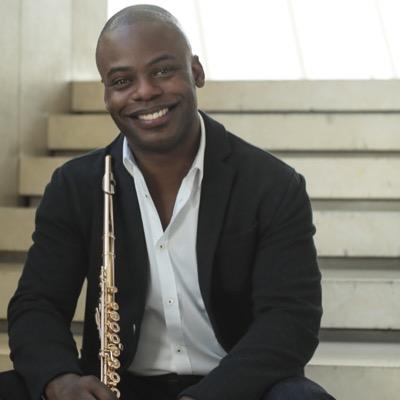 Demarre McGill is principal flute of the Seattle Symphony, and previously held the position of principal with the Dallas and San Diego symphonies. He served as acting principal flute of the Metropolitan Opera Orchestra and with the Pittsburgh Symphony Orchestra. McGill has soloed with the orchestras of Philadelphia, Seattle, and Pittsburgh, as well as the Chicago Symphony. Winner of an Avery Fisher Career Grant, McGill is a former member of Chamber Music Society Two. He continues to take part in numerous international chamber music series, as well as regularly performs as a soloist and recitalist. He is co-founder of The Myriad Trio as well as the McGill/McHale trio with clarinetist Anthony McGill and pianist Michael McHale. McGill began playing flute at age 7 and holds a Bachelor’s degree in Flute Performance from The Curtis Institute of Music and earned a Master’s degree from The Juilliard School.