Michael Kannen, former cellist of the Brentano String Quartet and Director of Chamber Music at the Peabody Conservatory, dives into some of the highlights of the upcoming Seattle Chamber Music Society Winter Festival. Works by Beethoven, Brahms, Ravel, and Jeremy Turner will be discussed, as Kannen shares insights from the musician’s point of view. 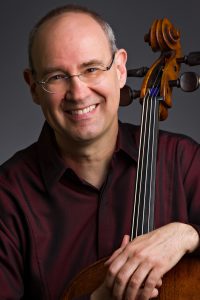 Cellist Michael Kannen has distinguished himself as a musician and educator of uncommon accomplishment who is comfortable in widely diverse musical situations and venues.  He was a founding member of the Brentano String Quartet and for seven years performed with that group on concert stages around the world, on radio and television, and on recordings.  During those years, the Brentano Quartet was awarded the first Cleveland Quartet Award,  the Naumburg Chamber Music Award, a Royal Philharmonic Award  and was the first participant in the Chamber Music Society of Lincoln Center II program.  Mr. Kannen continues to perform chamber music around the country as a member of the Apollo Trio,  on period instruments with the Houston-based group Context and at major music festivals such as Yellow Barn, Chamber Music Northwest, Portland Chamber Music Festival and the International Musicians Seminar in Prussia Cove, England.  Mr. Kannen has collaborated with such artists as Jessye Norman, Phyllis Bryn-Julson, Sergiu Luca, Donald Weilerstein, Pamela Frank, Leon Fleisher, Mitsuko Uchida, Peter Frankl, Paula Robison, David Krakauer, Jörg Widmann, Steven Isserlis, and with jazz artists Michael Formanek and Uri Caine.  His activities range from performances on period instruments to premieres of the music of our time.  He has recorded for the CRI label.  Mr. Kannen has served on the faculties of Dartmouth College and the Purchase College Conservatory and he is currently the Director of Chamber Music at the Peabody Conservatory of Music, where he holds the Sidney Friedberg Chair in Chamber Music.