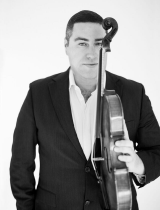 Michael Klotz was born in Rochester, NY, and is the violist of the Amernet String Quartet, Ensemble-in-Residence at Florida International University in Miami. Since making his solo debut with the Rochester Philharmonic at age 17, Michael has performed as soloist, recitalist, and chamber musician in important venues throughout the US, Canada, Mexico, Colombia, Dominican Republic, England, Belgium, Spain, Israel, Romania, Japan, and Korea. Passionately dedicated to chamber music, Michael Klotz has performed as guest violist with the Ying, Shanghai, and Borromeo String Quartets as well as with distinguished musicians such as Shmuel Ashkenasi, Arnold Steinhardt, Roberto Díaz, Clive Greensmith, Marc Johnson, Toby Appel, Robert deMaine, Anthony McGill, and many others. Recent highlights include two performances at the Kennedy Center, a performance and recording at Princeton University with the Princeton University Orchestra, a return tour of Israel, and recitals in Miami and Aventura. Michael is a graduate of the Eastman School of Music. In 2002 he became one of the few people in the history of the school to complete a double Master’s degree in violin and viola at The Juilliard School.