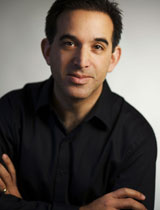 Pianist Max Levinson won First Prize at the Dublin International Piano Competition, the first American to achieve this distinction, and was awarded the Avery Fisher Career Grant. In 2005, he was given the Andrew Wolf Award for his chamber music playing. Max Levinson has performed as soloist with the symphonies of San Francisco, St. Louis, Detroit, and Baltimore, as well as the Los Angeles Philharmonic, among others. Recital appearances include the Kennedy Center, Tonhalle Orchester Zurich, Ravinia, Lincoln Center, and Wigmore Hall. Artistic Director of the San Juan Chamber Music Festival (in Ouray, Colorado), Max Levinson is an active chamber musician and has appeared at numerous music festivals including Mostly Mozart, Santa Fe, Marlboro, Tanglewood, La Jolla, Bravo/Vail, and Killington. Max Levinson has several recordings, including his most recent, the Brahms Sonatas for Violin and Piano, with violinist Stefan Jackiw. Strongly committed to nurturing young audiences, Max Levinson has been a participant in the GRAMMY-in the-Schools program throughout the United States. He is on the faculty of the New England Conservatory and the Chair of the Piano Department at Boston Conservatory. Born in the Netherlands and raised in Los Angeles, Levinson began studying piano at age five. He attended Harvard University, graduating cum laude with a degree in English Literature, and later completed his graduate studies at the New England Conservatory of Music.