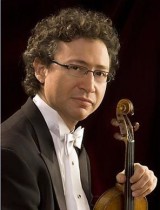 Mr. Velinzon began playing the violin at the age of six and graduated from the Leningrad School for Gifted Children. After coming to the United States, he went on to study at The Juilliard School, working under the guidance of the renowned pedagogue Dorothy DeLay. He made his New York recital debut at Carnegie’s Weill Recital Hall as a winner of the Artist International Young Artists Auditions, after which Strad Magazine described his playing as "very musical and intensely serious."

In 2010 Alexander Velinzon made his Wigmore Hall debut as part of “London Philharmonic Soloists” series.