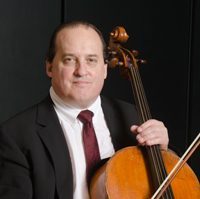 Ronald Thomas enjoys an active and varied career as performer, teacher and artistic administrator, and is celebrating his 34th consecutive year with Seattle Chamber Music Society. He is the co-founder and, for 26 years was the Artistic Director, of the Boston Chamber Music Society, was the Principal Cellist of the Saint Paul Chamber Orchestra, and is Artistic Director of the Chestnut Hill Concerts in Madison, CT. He has appeared as soloist and in recital with orchestras throughout the United States, Europe, and Asia. He has performed with the Chamber Music Society of Lincoln Center both at Alice Tully Hall and on tour. Festival appearances include Bravo! Vail Festival, Spoleto Festival, Blossom Festival, Chamber Music Northwest, La Musica, Music@Menlo, Sarasota Festival, Music from Angel Fire, Music in the Mountains, Yale at Northfolk Festival, and the festivals of Dubrovnik, Edinburgh, and Amsterdam. Throughout his career Thomas has been an enthusiastic supporter of new music and has taken part in numerous world premieres. Thomas was the Artistic Partner for Mainly Mozart’s Chamber Players for the past 27 seasons. He taught at Peabody Conservatory and now is on the faculty of Mannes College of Music in NYC.