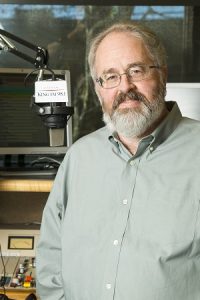 Dave Beck hosts KING FM’s afternoon show. Previously, he was an award–winning producer of KUOW Presents. He had been at KUOW since 1985, beginning his career there as classical music host and music director. From 1993 to 2000 he was co–host of Weekday. His national and regional broadcast honors include the Public Radio News Directors Incorporated (PRNDI) Award for Best Interview and the Society of Professional Journalists Northwest Regional Excellence Award. Dave has won awards for his on–air conversations with historians Stephen Ambrose and Nathaniel Philbrick. An active musician (cellist) as well as broadcaster, Dave is a member of the Auburn Symphony Orchestra and has played as principal cellist of the Bellevue Philharmonic and Seattle Philharmonic Orchestras. He serves on the board of directors of the Seattle Youth Symphony Orchestra and regularly plays in the Seattle based chamber music society Klassikon and in the Bravura String Quartet. A University of Washington music graduate, his cello instructors have included Toby Saks, Raymond Davis and Cordelia Wikarski Miedel.