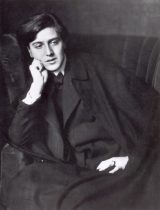 Alban Maria Johannes Berg was born in Vienna and was a member of the Second Viennese School. He composed with the romance of Mahler and Wagner as well as an adaptation of Schoenberg’s twelve-tone scale. Berg is celebrated as a composer, scholar, teacher, and is known as the “classicist of modern music”.

As a child, Berg had been more interested in literature than in music and, at the urge of his brother and father, he began to compose at fifteen, teaching himself music. During this early period, Berg composed more than 100 songs and duets, most of which remain unpublished. In 1904, four years after his father’s death, Berg met Schoenberg. Realizing his potential, Schoenberg agreed to take him on as a non-paying student. Berg studied under Shoenberg until 1911 learning techniques in composition, counterpoint, theory, and harmony. He practiced Shoenberg’s belief that a piece should be unified under a single idea yet different (which became known as developing variation).

Berg married singer Helene Nahowski in 1911, despite the hostile disapproving of her family. Conducted by Shoenberg in 1912 following the marriage, only two of Berg’s Five Songs on Picture Postcard Texts by Peter Altenberg were premiered in Vienna as the concert was cut short by rioting of the audience provoked by the music itself which was based on the risqué content of the writings of Altenberg (pen name Richard Engländer, aka P.A.). The work was not performed in full until 1952 and remained unpublished until 1966.

Dedicated to Alma Mahler, the widow of Gustav Mahler, Berg’s first public success occurred when excerpts from his opera Wozzeck were performed in 1924. Wozzeck was presented in its entirety in 1925 after 137 rehearsals at the Berlin State Opera and remains as one of Berg’s most important works and was his first attempt to deal with social problems within operatic traditions change the focus from tragic fates to be more symbolic of real human existence.

Berg’s most well-known piece is the Elegiac Violin Concerto which applies a 12-tone technique, incorporates quotations or borrowings from historical tonal music such as Bach and a Carinthian folk song. His second opera Lulu, which was composed entirely using the 12-tone system, was unfinished when Berg died on Christmas Eve in 1935 in Vienna from blood poisoning from an insect bite. Work on Lulu continued posthumously by Friedrich Cerha and it was premiered in 1979.