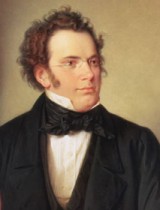 Franz Schubert absorbed the music of Haydn, Mozart and early/middle Beethoven. In his chamber music and symphonies he accepted classical models, though invested them with a subjectivity unfound in the Classical era. His music is more internalized and Romantic than his predecessors in the sense conveyed by sensucht (yearning). He wrote more than 600 songs, a great many of which are still in the standard song recital repertoire. His music enchants through his almost magical feel for unexpected yet seemingly inexorable harmonic changes and great sensitivity to mood changes brought about by shifting between major and minor—a lesson learned, no doubt, by his study of Mozart.