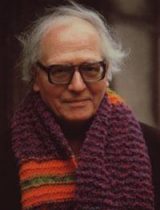 French composer Olivier Messiaen’s compositional style was one that drew from cultures around the world, nature (especially birdsongs), emotions, serialism, and Catholicism. Messiaen also experienced a form of synesthesia and he would often describe the color progressions of modes and chords as they related to the colors that filled his head when hearing them. His music is rhythmically complex and often utilizes modes of limited transposition (a method of transposition outlined by Messiaen in his book La technique de mon langage musical (The Technique of my Musical Language) which consists of seven modes (internally symmetrical) and their transpositions which allowed Messiaen to compose without the tonal focus present in other modes.

Messiaen began studying music at a young age by teaching himself to play the piano and began composing by age seven. In 1919, at age 11, Messiaen’s family moved to Paris to allow him to enroll at the Conservatoire. Even in his early compositions, Messiaen had a unique voice and didn’t conform to any specific stylistic school of the time. He was a renaissance man as he took interest in all aspects of the cultures of the world and not just their musical heritage, however his Catholic heritage was always a present influence. In 1931, just after his graduation from the Conservatoire, Messiaen was appointed the principal organist at the La Trinite in Paris, a post he held for more than forty years until his death in 1992. Messiaen’s reach is felt through his output as a composer, but also through his many years teaching.

His teaching career experienced an interruption when Messiaen was appointed as a military nurse (rather than a soldier) and was taken as a prisoner of war by the Germans from 1940 to 1942. When taken hostage, no weapons were found on his person during the search, but instead writing supplies and musical scores. Because of this, Messiaen was allowed special privileges including the opportunity to play the camp organ. During this time he composed Quatuor pour la fin du temps (Quartet for the End of Time) which became his first piece to incorporate the use of birdsong. Scored for the instruments on hand (piano, clarinet, violin, and cello), the Quartet was premiered in the camp by Messiaen and three fellow prisoners. The piece has gone on to be revered as one of the greatest chamber works of the 20th century. Messiaen spent a great deal of time transcribing the songs of birds and incorporating them into compositions (like Chronochromie) and including them in his Catalogue d’oiseaux (Catalog of the Birds) for solo piano.

After retiring from teaching in 1978, Messiaen continued to compose, however public appearances were often disrupted because of health issues and repeated surgery on his back. Messiaen died in 1992 and six months after his death his final commissioned piece, Eclairs sur l’au-dela… was premiered by the New York Philharmonic.