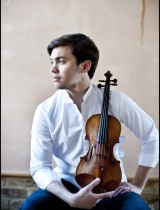 Twenty-six year old American violinist Benjamin Beilman has received a Borletti-Buitoni Trust Fellowship in 2014, and an Avery Fisher Career Grant and a London Music Masters Award in 2012. During the 2016–17 season Beilman returned to the Philadelphia Orchestra, performing with them at Carnegie Hall. He also appeared as soloist on the Chicago Symphony’s new music series. He made his debuts with the City of Birmingham Symphony and the Dvorák Festival in Prague. Recent debuts include performances with the Dallas Symphony and the world premiere of a concerto by Finnis with the London Contemporary Orchestra, and engagements with the London Philharmonic, Frankfurt Radio Symphony, Tonhalle, Basel Symphony orchestras and in North America the Orchestre Métropolitain de Montréal, San Francisco Symphony, Indianapolis Symphony, Detroit Symphony and Los Angeles Chamber orchestras amongst others. Beilman performs regularly with the Chamber Music Society of Lincoln Center both in New York and on tour and is a frequent guest artist at chamber music festivals including [email protected], the Marlboro, Santa Fe, Mecklenburg-Vorpommern and Verbier Festivals. In recital he has played at Weill Hall, Carnegie Hall, YCA festivals in Tokyo and Beijing and Louvre Paris, Tonhalle Zürich and Wigmore Hall. Beilman studied at the Music Institute of Chicago, The Curtis Institute of Music, and at the Kronberg Academy.