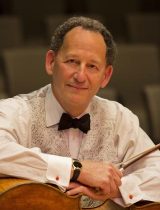 Founder, Executive and Artistic Director of the Montréal Chamber Music Festival and Professor at the Conservatoire de musique du Québec à Montréal, cellist Denis Brott has toured on four continents as soloist, recitalist and chamber musician. He was cellist in the Orford String Quartet for eight years. He has also appeared as guest with numerous ensembles including the Guarneri, Emerson, Tokyo and Fine Arts String Quartets. Denis Brott is the recipient of the Great Montrealer Award and the Queen Elizabeth Diamond Jubilee Medal in recognition of his cultural contribution to Canada. In 2014, Canada’s Governor General bestowed upon him the Order of Canada. In December 2016, Denis Brott was invested into the Order of Montréal for his contribution to the international reputation of the city. The list of his teachers includes cellists Leonard Rose, Janos Starker, and Gregor Piatigorsky. At a young age, he won a succession of prizes, including the Young Musicians Foundation Debut Award and the Munich International Cello Competition. In 1985, Denis Brott played a pivotal role in the creation of the Canada Council for the Arts Musical Instrument Bank which gives him the use of a 1706 David Tecchler cello.