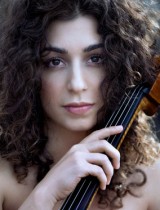 Cellist Ani Aznavoorian appears as a soloist and chamber musician, including performances with the Chicago Symphony Orchestra, the Boston Pops, the Tokyo Philharmonic, the Helsinki Philharmonic, the Finnish Radio Symphony, the International Sejong Soloists, the Indianapolis Philharmonic, the San Jose Symphony, the Juilliard Orchestra, Concertante di Chicago, and the Edmonton Symphony. Ms. Aznavoorian has also appeared as recitalist and chamber musician throughout the United States, Italy, France, Finland, Yugoslavia, Japan, Korea, Australia, Taiwan, and Canada. This season marks Ms. Aznavoorian’s fourth year as principal cellist of Camerata Pacifica. In 2000, Ms. Aznavoorian received the Bunkamura Orchard Hall Award. As a recipient of the 1995 Level I award in the National Foundation for the Arts Recognition and Talent Search, Ms. Aznavoorian became a Presidential Scholar in the Arts and performed as soloist at the Kennedy Center in Washington, D.C. Ms. Aznavoorian received both her Bachelor and Master of Music degrees from The Juilliard School. She is an avid chamber musician, a member of the International Sejong Soloists, and is also a founding member of the Corinthian Trio with pianist Adam Neiman and violinist Stefan Milenkovich. Ms. Aznavoorian also performs frequently on the Jupiter Chamber Music series in New York. She performs on a cello made by her father Peter Aznavoorian.