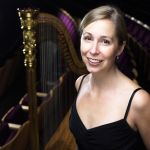 Heidi Krutzen is Principal Harpist with both the Vancouver Opera Orchestra and the CBC Radio Orchestra, and has been guest principal harpist with numerous orchestras across Canada notably the Toronto Symphony, Calgary Philharmonic and Vancouver Symphony. She has appeared as a soloist with the Nashville Chamber Orchestra and Oregon Bach Festival Orchestra in Mozart's Flute and Harp concerto, and has recorded as a soloist with the Latvian National Symphony in Riga. Heidi has performed in chamber music concerts in premiere festivals across North America including the Seattle Chamber Music Society, Oregon Bach Festival, Music in the Vineyards, Bach Dancing and Dynamite Festival, Strings in the Mountains, Sitka Summer Music Festival, Vancouver Chamber Music Festival and Music in the Morning. Most recently she was a featured soloist in the 2007 Festival Vancouver. Heidi has collaborated with many distinguished musicians including James Ehnes, Jonathan Crow, Benjamin Bowman, the Pacifica, Satie, and Young Danish String Quartets, Jean Stilwell and Michel Debost. Upcoming concerts include performances with the Shanghai Quartet, Amici Ensemble, and violinist Sheryl Staples.

Heidi is on the faculty for the National Youth Orchestra of Canada, currently teaches at the UBC School of Music, and has given masterclasses at many of the major North American Universities. Her performances and recordings have been broadcast on NPR, CBC, Northern German Radio and Netherlands Radio. She is a member of Trio Verlaine, the Krutzen/McGhee Duo and Turning Point Ensemble. With duo partner Lorna McGhee, she has commissioned four new works for flute and harp and has released two CDs for the Skylark label. The Duo have performed in England and throughout North America including several tours for the Piatigorsky Foundation. Trio Verlaine's first CD "Fin de Siecle - the Music of Debussy and Ravel" will be released on the Skylark label in March. The Trio are delighted to premiere a work by Jeffery Cotton in July, commissioned on their behalf by the Seattle Chamber Music Society.

Heidi is a prizewinner in the American Harp Society National Competition. She is a graduate of the Eastman School of Music, with both a Bachelor and Masters of Music and Eastman's highest honour, the "Performer's Certificate". She continued her studies with renowned pedagogue Jacqueline Borot in Paris, France.