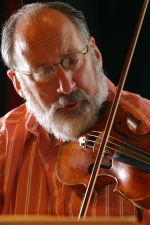 Paul Rosenthal was born in 1942 and began playing the violin at the age of three. He studied with Dorothy DeLay and Ivan Galamian at the Juilliard School and with Jascha Heifetz at the University of Southern California.

Mr. Rosenthal has made his home in Alaska since 1969 and has enjoyed performing innumerable concerts in every corner of the vast state. In 1972, Rosenthal founded the Sitka Summer Music Festival which continues to attract musicians and audiences from many countries and is recognized as one of the outstanding chamber music festivals in the United States. He also directs the festival's affiliated Autumn Classics and Winter Classics series in Anchorage.

As soloist and chamber musician, this last season Mr. Rosenthal has performed with orchestras from Alaska to New York and in recitals and chamber music series in the U.S., Canada, Germany, Holland, Scotland and the Bahamas.

He can be heard in recordings on the RCA, Vox, Fidelio, Arabesque, Vanguard and Biddulph labels. Most recently released are a premiere recording of the String Quintet Op. 14 by Taneyev and Tchaikowsky's Souvenir de Florence, recorded in 1968 with Jascha Heifetz and Gregor Piatigorsky.

Paul Rosenthal holds honorary degrees as Doctor of Humane Letters from the University of Alaska and Doctor of Music from Alaska Pacific University. He performs on a violin made by Joseph Guarnerius in Cremona in 1706.