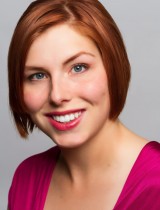 Rachelle Moss is a Kansas native, Ms. Moss began her education at Kansas City Kansas Community College. She sang the alto solo for Mozart's Coronation Mass with the KCKCC Honorworks Choir.  Most recently, she performed the leading role of Mrs. Lovett in Sondheim's Sweeney Todd with the University of North Texas's Opera Theater. Other opera engagements from the 2013/2014 season included portraying Madame Larina (Eugene Onegin) and Gertrude (Romeo et Juliette) in scenes programs, and covering both Mama McCourt (The Ballad of Baby Doe) and Bianca (The Rape of Lucretia) for Spotlight on Opera in Austin, TX. In celebration of Verdi's 200th Birthday, Ms. Moss sang the part of Maddalena in the Rigoletto Quartet at the University of North Texas.

Rachelle received a Bachelor's in Music History and Master's in Vocal Performance from the University of North Texas.