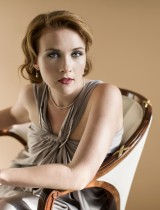 Symphonic engagements of the 2014-2015 season include performances of  Berlioz’s Roméo et Juliette with Tugan Sokhiev and  the Deutsches Symphonie-Orchester, Verdi’s Requiem with Andrés Orozco-Estrada and the  Houston Symphony, Mahler’s Third Symphony with Sir Andrew Davis and the Melbourne Symphony, Beethoven’s Missa Solemnis with Michael Tilson Thomas and the San Francisco  Symphony and  Mozart’s Requiem with the Colorado Symphony conducted by Pinchas Zukerman and the Seattle  Symphony conducted by Ludovic Morlot. In recital, Ms. Cooke appears with pianist Julius Drake at Carnegie Hall and under the auspices of San Francisco Performances in works of Haydn, Liszt and Granados.

Her operatic engagements this season include the world premieres of Laura Kaminsky’s As One at the Brooklyn Academy of Music and Joby Talbot’s Everest with The Dallas Opera directed by Leonard Foglia, as well as the role of Anna and cover of Didon in Sir David McVicar’s production of Berlioz's Les Troyens at San Francisco Opera under the baton of Donald Runnicles.

A frequent performer of contemporary works, Ms. Cooke performs the orchestral premiere of Jake Heggie’s Camille Claudel: Into the Fire song cycle with the Berkeley Symphony, a new work by Pierre Jalbert with the River Oaks Chamber Orchestra and a premiere song cycle by Kevin Puts at Carnegie Hall. Chamber music performances include collaborations with I Musici de Montréal and Jean-Marie Zeitouni in Mahler's Lieder eines fahrenden Gesellen and Ravel's Shéhérazade and with the Miró Quartet at the Kennedy Center in works of Wolf, Crumb and Schubert. Additional engagements include collaborations with Jeremy Denk and the St. Paul Chamber Orchestra.