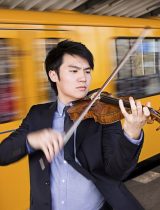 Violinist Ray Chen in 2012 became the youngest soloist ever to perform in the televised Nobel Prize Concert for the Nobel Laureates and the Swedish Royal Family. He was also the winner of the Queen Elisabeth competition in 2009 and the Yehudi Menuhin competition in 2009.

Ray looks to expand the classical music audience by increasing its appeal to a younger generation by utilizing all available social media platforms. He is also the first ever classical musician to be invited to write a regular blog about his life as a touring soloist for the largest Italian publishing house, RCS Rizzoli.

Ray is a Sony artist and has released several critically acclaimed albums: a recital program “Virtuoso” of works by Bach, Tartini, Franck, and Wieniawski, and the Mendelssohn and Tchaikovsky concertos with Swedish Radio Orchestra and Daniel Harding. His third recording, an all-Mozart album with Christoph Eschenbach and the Schleswig-Holstein Festival Orchestra, was released in January 2014.

Born in Taiwan and raised in Australia, Ray was accepted to The Curtis Institute of Music at age 15, where he studied under Aaron Rosand and was supported by Young Concert Artists. He plays the 1715 "Joachim" Stradivarius violin on loan from the Nippon Music Foundation.