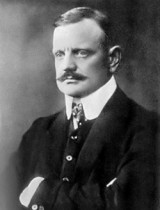 Born in 1865, Finnish composer Jean Sibelius, born Johan Julius Christian Sibelius, is considered the most powerful symphonist to have emerged in Scandinavia.

In his youth, Sibelius demonstrated great potential on the violin and composed chamber music for his friends and family to play. In his schooling, however, Sibelius first studied law, but quickly abandoned it to study music under Martin Wegelius and later left Finland to study music in Berlin and Vienna. In 1892, his Kullervo symphony gained him recognition and put him on the musical map of Finland. The major works following this one also shared a nationalist sentiment. Finlandia made Sibelius a household name and his international fame brought to the world’s view Finland’s national aspirations.

In 1898 he gained himself a German publisher which boosted his international renown. His pieces were featured by Henry Wood, Hans Richter, Weingartner, Toscanini and Richard Strauss. While his early works showed the influed of the Viennese Classics Grieg and Tchaikovsky, when Sibelius entered his forties his Third Symphony (1907) brought a change and showed Sibelius as being out of step with the times. His palette became more classical, more disciplines and economical. From then on, Sibelius never approached a symphony the same way again. His Tapiola (1926) is his work that makes the most astonishingly original use of the orchestra.

After the end of World War I, Sibelius suffered feelings of isolation from the musical community and for more than thirty years he lived in retirement at Järvenpää in a virtually unbroken silence until his death in 1957. While his Eighth Symphony had rumors of intended publication, it fell victim to his destructive self-criticism and all that remains of it is a sketch of the first three bars.

Sibelius composed with a fresh approach to structure, a flair for form, and in his later years concentrated on the musical and spiritual vision allowing pieces to evolve organically.