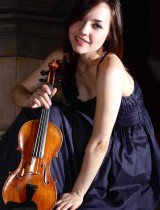 Violinist Emily Daggett Smith has had recitals and chamber music performances across the United States, Europe, South America and Asia. Ms. Smith performs regularly at numerous festivals and series around the country such as the Concordia Chamber Ensemble, Festival Mozaic, Lenape Chamber Ensemble, Mainly Mozart Festival, and Ravinia's Steans Institute. She has shared the stage with many renowned musicians including current and former members of the Cleveland, Emerson and Juilliard String Quartets. Her performances include concerts at Carnegie Hall, Alice Tully Hall, the Shanghai Grand Theatre and the Vienna Konzerthaus, and have been featured on PBS's national broadcast Live from Lincoln Center, NPR's From the Top, and WWFM The Classical Network in New York and Pennsylvania. As a soloist, Ms. Smith made her New York concerto debut at the age of 21 in Alice Tully Hall, playing the Beethoven Violin Concerto with the Juilliard Orchestra. Since then she has performed concerti with many orchestras including the Iris, Festival Mozaic, and New Amsterdam Symphony Orchestras, and the New York Classical Players. Growing up in the Boston area, she has also appeared as soloist with various orchestras in New England. While attending The Juilliard School, she served as a concertmaster of the Juilliard Orchestra.