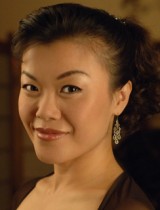 Known for her lyric voice, impeccable musicianship, and readiness to explore new repertoire, the South Korean-born American soprano, Hyunah Yu, first received a degree in molecular biology from the University of Texas in Austin and was successfully pursuing a career in molecular biology until a tragedy in her life caused her to re-evaluate her passions and she returned to school to study voice at the Peabody Conservatory of the Johns Hopkins University in Baltimore earning a Master of Music and an Artist Diploma.

Gaining her first recognition in 1999 as a soloist in the “St. Matthew Passion” with the New England Bach Festival, she’s gone on to win prizes in the 1999 Walter W Naumburg International Competition, be a finalist in the Dutch International Vocal Competition and the Concert Artist Guild International Competition in New York and in 2003 she was nominated by pianist and collaborator Mitsuko Uchida and awarded a Fellowship by the Borletti-Buitoni Trust. In 2004, Hyunah made her recital debut at Carnegie Hall and has since been involved at the Marlboro Music Festival, Boston Chamber Music Society, the New England Bach Festival and has performed solo recitals at Jordan Hall in Boston, Alice Tully Hall in Lincoln Center and the Carnegie Recital Hall in New York.

Hyunah has recorded two solo recitals for BBC Radio 3’s “Voices” program. Her first CD was “A Celebration of Song” featuring works by Mozart, Schubert, R. Schumann, Brahms and Strauss under the Norae label in 1999 and in 2007 her second collection was released under the Warner Classics label titled “Mozart and Bach- Arias and Cantatas”.