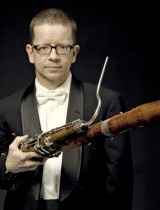 Born in Montréal in 1972, Stéphane has held the position of Principal bassoon with the Orchestre Symphonique de Montréal (OSM) since 1998. He has also served as Principal bassoon with the Saito Kinen Orchestra, the National Arts Centre Orchestra, and the Buffalo Philharmonic Orchestra. He was a member of the New World Symphony in Miami Beach and also took part in the Solti Orchestral Project at Carnegie Hall.

Stéphane has performed throughout Canada and the US as a recitalist and chamber musician appearing in festivals such as the Ottawa and Montréal Chamber Music Festivals, the Banff Arts Festival, the Orford Arts Festival, the Monadnock Music Festival, Musica Camerata Montréal, Allegra Chamber Music, the Debut Series at the National Arte Centre and in concert broadcasts on the English and French CBC networks as well as on National Public Radio.

In 1994, Stéphane was a first prize winner at both the OSM-Standard Life Competition and the Orchestre Symphonique de Québec as well as the concerto competitions of the New World Symphony in 1996, Yale School of Music in 1995 and the Conservatoire de Musique de Montréal in 1992.

Stéphane holds two Premier Prix degrees in bassoon and chamber music from the Conservatoire de Musique de Montréal and received a Masters of Music from the Yale School of Music.