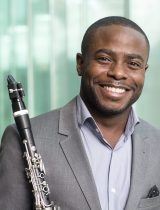 Anthony McGill was named principal clarinet of the New York Philharmonic in 2014. He previously served as principal clarinet of the Metropolitan Opera Orchestra and associate principal clarinet of the Cincinnati Symphony Orchestra. McGill has appeared as soloist with the Met, the Baltimore, Kansas City and New Jersey orchestras, and he has recorded the Nielsen Concerto with the New York Philharmonic. As a chamber musician he has performed throughout the United States, Europe, Asia and South Africa. Festival appearances include Tanglewood, Marlboro and Santa Fe, among others. Anthony McGill performed with Itzhak Perlman, Yo-Yo Ma and Gabriela Montero at the inauguration of President Obama in 2009. He is a founding member of the McGill/McHale Trio. McGill was the 2015–16 WQXR Artist in Residence and has appeared on Performance Today, MPR’s St. Paul Sunday Morning and Mr. Roger’s Neighborhood. He recently received the John Jay Justice Award. A graduate of The Curtis Institute of Music, Anthony McGill serves on the faculty of Curtis, The Juilliard School, the Peabody Institute of Johns Hopkins University, Bard College Conservatory, and Manhattan School of Music.