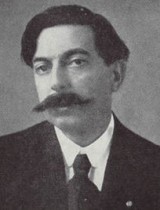 Spanish composer Enrique Granados, son of a Cuban military member, began his study of music at an early age. He studied piano under Joan Baptista Pujol who created the first Catalan piano tradition. In 1892, Grenados gave the first performance of Grieg’s piano concerto in Spain. In 1901 he founded the Granados Academy. Granados’ style could be described as neo-romantic as his expressive style found influence in Chopin, Schumann, Schubert and Grieg. Granados represents the romantic and poetic piano of 19th century Spain. His contributions include piano music (12 Danzas espanolas), chamber music, songs, zarzuelas, an opera (Goyescas) and an orchestral tone poem based on Dante’s Divine Comedy.  Many of his piano compositions have been transcribed for the classical guitar and are some of the most beautiful music in the guitar repertoire.