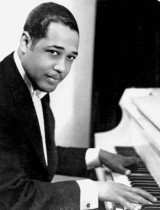 Duke Ellington called his music “American Music” rather than jazz, but still he remains one of the most influential figures in jazz, if not in all American music. He is considered one of the 20th century’s best known African American personalities. Since his death, Ellington’s reputation has continually increased as new generations of listeners have discovered recordings of his signature music. In his fifty year career, he played over 20,000 performances around the world as a trumpeter. Ellington’s music transcends boundaries and is just as often heard in the concert hall as the jazz club. His music and life have been described as “beyond category”, composing over 3,000 songs during his lifetime including favorites like It Don’t Mean a Thing (If It Aint’s Got That Swing) and Take the “A” Train. Ellington died of lung cancer and pneumonia in 1974.