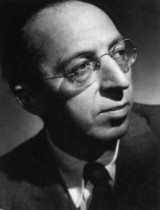 In the early 1920s his teacher, Nadia Boulanger, asked him to write an organ concerto and that season the Symphony for Organ and Orchestra was premiered in Carnegie Hall with the New York Symphony. The decade that followed saw the production of the scores that spread Copland's fame throughout the world. Aaron Copland established American concert music through his compositions, polemics, promotions, and just plain hard work. He belongs to a generation of composers which not only raised American music to a thoroughly professional level, but put it on an equal footing with contemporary developments in European modernism. As Igor Stravinsky once remarked, "Why call Copland a great American composer? He's a great composer." He became an impresario of modern-music concerts, established the composition department at Tanglewood, helped publish modern American works, found patrons for young, promising composers, wrote and lectured on a wide range of modern music (many of these essays became landmarks of musical criticism), and even managed to produced a music-appreciation book for the general reader, What to Listen for in Music. Copland wrote numerous works with Rodeo, Billy the Kid, Appalachain Spring, and Fanfare for the Common Man being some of the most recognizable.