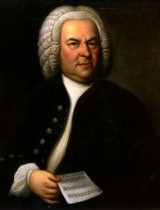 Johann Sebastian Bach was a German composer, organist, harpsichordist, violist, and violinist of the Baroque Period. He enriched many established German styles through his skill in counterpoint, harmonic and motivic organisation, and the adaptation of rhythms, forms, and textures from abroad, particularly from Italy and France. Many of Bach's works are still known today, such as the Brandenburg Concertos, the Mass in B minor, the The Well-Tempered Clavier, and his cantatas, chorales, partitas, passions, and organ works – and his music is revered for its intellectual depth, technical command, and artistic beauty.

Half a century after Bach’s death, Beethoven noted that his predecessor should not be called “Bach” (“brook”) but “Meer” (“ocean”), a term to better convey Bach’s vastness of achievement. Like an ocean, Bach served as the ultimate reservoir into which flowed diverse lesser streams and musical tributaries. This is the vision of Bach as the summation of the Baroque era, though for future composers up to our time, this “ocean” proved to be a source of continued renewed compositional life. His influence on composers has, despite dramatic changes in musical style, continued to this day. The legacy of his choral music and organ works remain unequaled to this day, and his considerable body of chamber music remains vital as well to modern musicians and audiences. His intimately scaled concertos live jointly in the worlds of orchestral and chamber music.