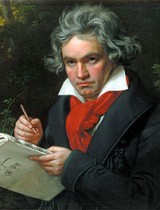 The son of an alcoholic and abusive musician, Ludwig van Beethoven drew from life’s vicissitudes to power his fertile musical imagination. Formally a classicist who expanded the forms he inherited from Haydn and Mozart, he invested them with a more intense and wider range of feelings. A recurrent theme, especially in his so-called middle period, is individual triumph over adversity. Though Mozart tried to establish an independent life (i.e., not in the employ of a noble patron), Beethoven established the Romantic notion of the artist as an independent creator. Though he did write one opera and several choral works, he was primarily an instrumental composer whose symphonies, concertos, piano sonatas and chamber music dominate the musical landscape.