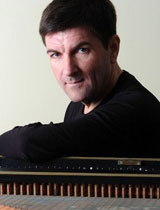 Luc Beauséjour has won numerous awards in the last few years, including "Performer of the Year" by the Conseil québécois de la musique. Mr. Beauséjour leads a very active performing schedule in Canada and abroad that has taken him to France, the United States, Austria, Germany, Hungary, Belgium, and Bermuda. He has performed at numerous festivals, including the Festival d'Uzès (France), the Lanaudière International Festival, the Festival d'Ambronay, the festival Un été à Bourges, the Lamèque Early Music Festival (New Brunswick), and the Vancouver Early Music Festival. He was invited to perform the Goldberg Variations at the Glenn Gould Studio in Toronto for a CBC commemoration of the great pianist's birthday. He is also heard regularly on both CBC and Radio-Canada. He is a much sought after recording artist for labels such as Analekta, Naxos, and CBC Records. In 1994, Mr. Beauséjour founded the organization "Clavecin en concert", a concert series for harpsichord music. His performances in this series have included the complete works for harpsichord of Rameau, J. S. Bach's Goldberg Variations, The Art of Fugue, and Book I of The Well-tempered Clavier. Born in Rawdon, Quebec, Mr. Beauséjour holds a Doctorate from the Université de Montréal. He studied harpsichord with Mireille Lagacé and organ with Bernard Lagacé, and trained in Europe under Ton Koopman and Kenneth Gilbert. First Prize winner of the 1985 Erwin Bodky International Harpischord Competition in Boston, he has also won prizes at several other competitions and received a number of grants from the Canada Council and the Conseil des arts et des lettres du Québec. Mr. Beauséjour teaches harpsichord and organ in Montreal. www.lucbesejour.com