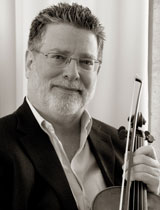 Toby Appel has appeared in recital and concerto performances throughout North and South America, Europe, and the Far East. He has been a member of such renowned ensembles as TASHI, and the Lenox and Audubon Quartets. Mr Appel has been a guest artist with the Vermeer, Manhattan, and Alexander Quartets as well as a frequent guest with the Chamber Music Society of Lincoln Center and with jazz artists Chick Corea and Gary Burton. Festival performances include those with Mostly Mozart, Santa Fe, Angel Fire, Bravo! Vail Valley, Chamber Music Northwest, and Marlboro, as well as festivals in England, France, Korea, Germany, Italy, Finland, and Greece. A most versatile artist, Mr Appel has narrated performances including: A Young Person's Guide to the Orchestra by Benjamin Britten, Ferdinand by Alan Ridout and Munro Leaf, Ode to Napoleon by Arnold Schoenberg, Histoire du Soldat by Igor Stravinsky, Masque of the Red Death by Andre Caplet and Edgar Allan Poe, and Facade by William Walton and Edith Sitwell. Mr Appel is a frequent commentator for National Public Radio's Performance Today. Toby Appel entered the Curtis Institute at age 13 under the guidance of Max Aronoff. He has toured for the United States State Department and performed at the United Nations and at the White House. Mr Appel's chamber music and recital recordings can be heard on the Columbia, Delos, Desto, Koch International, Opus 1, and Musical Heritage Society labels.