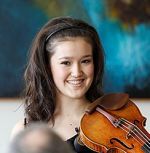 Since earning a Seattle Young Artists Festival Medal in 2005, violinist Marié Rossano has appeared as guest soloist with the Seattle Symphony and Utah Symphony, and over a dozen of the Pacific Northwest's leading orchestras including the Northwest Sinfonietta and Seattle Philharmonic. She has gained further recognition as National Winner of the 2008 MTNA Junior Strings Competition, and as First Laureate of the 2010 Stradivarius International Violin Competition.

Marié studies with Ida Kavafian at the Curtis Institute of Music in Philadelphia, as the Carrie L. Tolson Memorial Annual Fellow. Previously, Marié studied in Seattle with Simon James, Brian Lewis, and piano collaborator Hiro David. She has also participated in master classes given by James Ehnes, Leonidas Kavakos, Vadim Repin, Kyoko Takezawa, among others.

Also an avid chamber musician, Marié has performed with musicians such as Wendy Chen, Aloysia Friedmann, David Hardy, and Soovin Kim. She also leads the conductorless string ensemble Orcastra that she formed in 2009. Marié and friends have performed in benefit concerts for the Ngateu School in Tanzania, for tsunami relief in Japan, and for the Opal House Refuge in Guatemala.