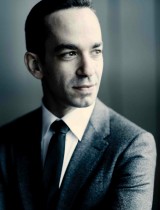 Israeli pianist Inon Barnatan currently serves as the first Artist-in-Association of the New York Philharmonic. This, the last of a three-season appointment, saw him appear as soloist in subscription concerts, take part in regular chamber performances, and act as ambassador for the orchestra. In 2016-17, Barnatan debuted with the Leipzig Gewandhaus Orchestra, the Chicago Symphony Orchestra, the Baltimore Symphony, and the Seattle Symphony. Other highlights included a tour with the Academy of St. Martin in the Fields and with recital partner cellist Alisa Weilerstein. Other highlights include concerto performances in Japan, Hong Kong, and Australia, as well as the complete Beethoven concerto cycle in Marseille. Awarded the Avery Fisher Career Grant in 2009, Barnatan has performed extensively with many of the world’s foremost orchestras, including those of Cleveland, Los Angeles, New York, Philadelphia, and San Francisco; the Academy of St. Martin in the Fields; Deutsches Symphonie-Orchester Berlin; Orchestre de la Suisse Romande; and the Jerusalem and Shanghai Symphony Orchestras. Barnatan’s discography includes recordings of Schubert's solo piano works, as well as a disc entitled Darknesse Visible, and Chopin and Rachmaninoff duo sonatas recorded with cellist Alisa Weilerstein.