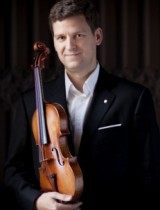 James Ehnes has established himself as one of the foremost violinists of his generation. Gifted with a rare combination of stunning virtuosity, serene lyricism and an unfaltering musicality, Ehnes is a favorite guest of many of the world’s most respected conductors. Ehnes’s long list of orchestras includes, amongst others, the Boston, Chicago, Cleveland, Philadelphia, Los Angeles, Pittsburgh, New York, London Symphony, Philharmonia, BBC Philharmonic, Czech Philharmonic, DSO Berlin and the NHK Symphony orchestras.

In 2016, Ehnes undertook a cross-Canada recital tour, performing in each of the country’s provinces and territories, to celebrate his 40th birthday. In 2010, he formally established the Ehnes Quartet, with whom he has performed in Europe at venues including Wigmore Hall, Auditorium du Louvre in Paris and Théâtre du Jeu de Paume in Aix, amongst others. Ehnes has an extensive discography and has won many awards for his recordings including a Gramophone Award, a GRAMMY Award and JUNO awards.

Ehnes began violin studies at the age of four, became a protégé of the noted Canadian violinist Francis Chaplin at age nine, made his orchestral debut with Orchestre Symphonique de Montréal at age 13 and graduated from The Juilliard School in 1997, winning the Peter Mennin Prize for Outstanding Achievement and Leadership in Music. He is a Fellow of the Royal Society of Canada and in 2010 was appointed a Member of the Order of Canada. James Ehnes plays the “Marsick” Stradivarius of 1715. (jamesehnes.com)