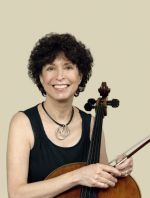 Toby Saks is the founder and Artistic Director of the Seattle Chamber Music Society since its inception in 1982. Professor of cello at the University of Washington since 1976, she is a frequent adjudicator at regional and national competitions. Ms. Saks has performed in the U.S., Canada, Europe, the former U.S.S.R., and Israel. Her chamber music credits include Boston Chamber Music Society and the festivals of Sitka, Vancouver, Cascade Head, Bargemusic, St. Cére, New Mexico, Amsterdam, Juneau, Marlboro, Stratford, Spoleto, and Anchorage. In 1988 she led musicians of the Seattle Chamber Music Festival on a two-week tour of the Soviet Union. Ms. Saks was first prizewinner at the International Pablo Casals Competition in Israel and a top prizewinner at the Tchaikovsky Competition in Moscow. A recipient of Fulbright and Rockefeller grants, she studied with Leonard Rose at The Juilliard School and with Andre Navarra at the Conservatoire de Musique in Paris. Ms. Saks made her New York Town Hall debut at age 18, after winning the New York Young Concert Artists auditions, and was a member of the New York Philharmonic from 1971-76.