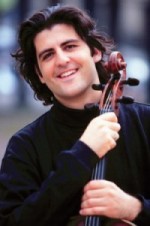 Israeli cellist Amit Peled, a musician of profound artistry and charismatic stage presence, is acclaimed as one of the most exciting instrumentalists on the concert stage today. Mr. Peled has performed as a soloist with many orchestras and in the world's major concert halls such as: Carnegie Hall and Alice Tully Hall, New York; Salle Gaveau, Paris; Wigmore Hall, London; Konzerthaus, Berlin; and Tel Aviv's Mann Auditorium. His Alice Tully Hall concerto debut received overwhelming praise where he played the Hindemith cello concerto. Recently Mr. Peled embarked on an extensive concerto debut tour in the US and Germany with the Nordwest Philharmonie, performing both Shostakovich Concerto No. 1 and Victor Herbert's cello concerto in Chicago's Millennium Park. As a recording artist, Mr. Peled has released three enthusiastically received CD's under the Centaur Records Label: "Reflections", "The Jewish Soul", and "Cellobration". As a founding member of the "Tempest Trio" with violinist Ilya Kaler and pianist Alon Goldstein, he has just recorded their debut CD for Naxos with Dvořák Trios. Mr. Peled is a professor at the Peabody Conservatory of Music at the Johns Hopkins University in Baltimore.