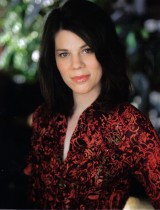 Mezzo-soprano Allyson McHardy’s repertoire encompasses roles from productions by Rossini, Handel, Caldara, Verdi, Mozart and Bizet as well as orchestral pieces by Mozart, Bach, Beethoven, and Elgar among many other works.

Native to Ontario, Allyson had intended to teach music until she discovered her voice while studying at university. She joined the Canadian Opera Company Ensemble and her career took off from there. She debuted with the San Francisco Opera as Olga in Eugene Onegin and has appeared with the Boston Symphony, Minnesota Orchestra, National Arts Centre Orchestra, Tanglewood, the Calgary Opera Company, the Canadian Opera Company, and with the Michigan Opera Theatre in Handel’s Guilio Cesare as Cornelia her performance gained her a nomination for a Wilde Award.

Recently, the recording of Handel’s Orlando, HWV 31 on which Allyson is a featured vocalist, was nominated for a 2014 Juno Award for Classical Album of the Year in the Vocal or Choral Performance category. Previous recordings include 2011 recording of Caldara’s La Conversione di Clodoveo, Re di Francia in which she performed the title role in addition to Bellini’s Norma, two works by Harry Somer- Serinette and A Midwinter Night’s Dream, and is featured on the Musica Leopolis label in Ukrainian music by composer Mykola Lysenko.

Allyson currently lives in Toronto with her husband and daughter.